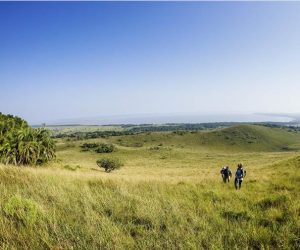 *The Eastern Shores is one of several unique areas where our Leopard Survey project takes places. Our Leopard Team moves across a few reserves throughout the year spending two months at a time on each.

The Eastern Shores extend from St Lucia through to Misson Rocks, Lake Bhangazi and Cape Vidal and is part of the iSimangaliso Wetland Park World Heritage Site. It is also an occasional site where our Leopard Population Survey takes place. At the southern end is St Lucia – a beautiful seaside town where our volunteers are given an opportunity to visit and partake in the activities offered.

St. Lucia Lake is connected to the sea by a narrow channel that is rich in Hippo, Crocodile, Goliath Heron and numerous fish-hunting birds. Four rivers feed the lake, maintaining the delicate balance against the inflow of sea water and evaporation. The Nile Crocodile plays an important part in maintaining the ecological balance. Cape Vidal and Mission Rocks are reef-sheltered beaches allowing relatively safe swimming, and excellent snorkeling. The coastline of the reserve is the natural habitat of turtles, two of which (Loggerhead and Leatherback) nest on the beaches. The Reserve is rich in bird life, and strolling through the dune forest is likely to bring you in sight of smaller mammals.