The African elephant belongs to the elephantidae family and is the largest mammal on land. These enormous grey and wrinkly creatures can weigh over 10 tons be anywhere from 2.5 to 4 meters tall. Elephants adapt easily and can be found in a variety of habitats throughout Africa from dense forests to open plains. The females and young live in herds while the bulls are often by themselves or in smaller all-male herds.

Elephants are herbivores and will eat any vegetation available to them, be it grass, leaves, fruit or bark. These large animals can live up to 65 years and have only a few predators that are able to kill them. Hyenas and lions are a threat to the calves and in certain areas lions have adapted to kill adult elephants.

ELEPHANTS ARE IN DECLINE DUE TO POACHING FOR BOTH IVORY AND MEAT. TO EFFECTIVELY MONITOR AND PROTECT THIS SPECIES WE ARE FITTING TRACKING COLLARS TO CERTAIN INDIVIDUALS. PLEASE CLICK BELOW TO VOLUNTEER WITH ELEPHANTS OR TO DONATE TO ELEPHANT CONSERVATION

Vulnerable and facing a high risk of becoming extinct in the wild.

In many areas elephants are currently being poached faster than they can reproduce. This is hugely significant when we consider that female elephants only produce a single calf after a 22 month gestation period. Male elephants also need to reach 20 years of age before they can successfully compete for mating.

There are approximately 470 000 African elephants in the wild in herds that wander through 37 African countries. There are two distinct subspecies of African elephant – Savanna elephants and the smaller Forest elephants. It is estimated that Savannah (or bush) elephants make up 25-35% of the total African elephant population. Both subspecies are in rapid decline due to habitat loss and poaching for the international ivory trade as well as for meat. 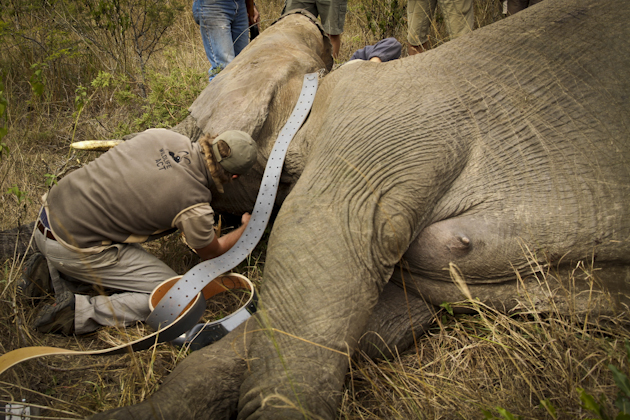