Vultures are part of the accipitridae family and are extremely important members of an ecosystem. Vultures fly in from huge distances to pick rotting carcasses clean thereby helping to control disease outbreaks. These magnificent birds essentially allow us to measure the functioning and health of an ecosystem. Many vulture species are now only abundant within protected nature reserves and these characteristic sightings are becoming more and more of a luxury.

One of the vulture conservation goals is to fine-scale vulture movement patterns of the various species breeding in the province by deploying GPS units to both adults and fledglings. We are hoping to identify trends based on these movements to help conservation management better protect these endangered birds.

Of the six vulture species that occur in South Africa, all are either endangered, or critically endangered.

SOUTHERN AFRICA’S VULTURE POPULATIONS ARE IN SERIOUS DECLINE. CURRENT TRENDS SUGGEST THAT ALL BREEDING PAIRS OF WHITE-BACKED & WHITE-HEADED VULTURES WILL BE LOCALLY EXTINCT WITHIN THE NEXT FEW YEARS. PLEASE CLICK BELOW TO SUPPORT

Vultures throughout southern Africa are specifically targeted for traditional medicinal purposes in the muthi trade as well as for meat. Poachers catch vultures by poisoning animal carcasses, which can wipe out huge numbers at once. There has been a 70% decline of breeding pairs since 2004 as a result.

Many cultures also have superstitions about vultures, such as the birds being harbingers of death, or mistaken beliefs that vultures are a threat to healthy livestock, and in many areas vultures are still illegally hunted or driven away from food sources. Accidental poisoning is another issue, as some medicinal drugs used to treat livestock are fatally toxic to vultures. The birds may also be poached as trophies or for illegal feather trading. In addition, due to their wide wingspans, vultures are susceptible to being electrocuted by power lines. 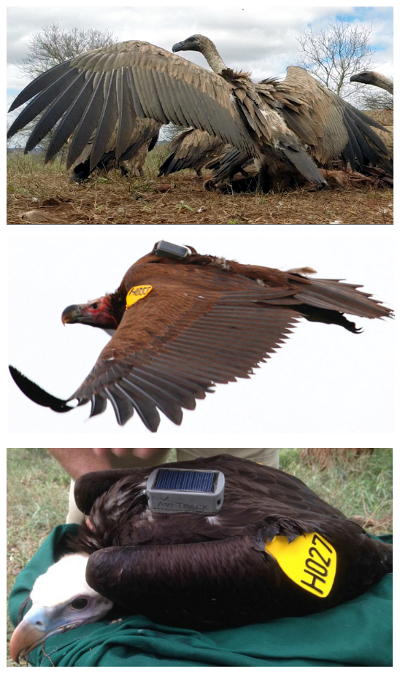 GET IN TOUCH OR READ MORE ABOUT OUR VULTURE TAGGING PROJECT