One night in the iMfolozi research camp our wildlife volunteers had a beautiful visitor – a male large-spotted genet (Genetta tigrina). Genets are nocturnal and have lovely spots, with a long, bushy, ringed tail. Mainly keeping to trees, they do occasionally forage on the ground. We were so excited to see him and he was more than happy to stop tree-hopping in order to pose for our photographs. He wasn’t shy at all and liked the paparazzi attention…

Could this be our famous Genet Jackson? 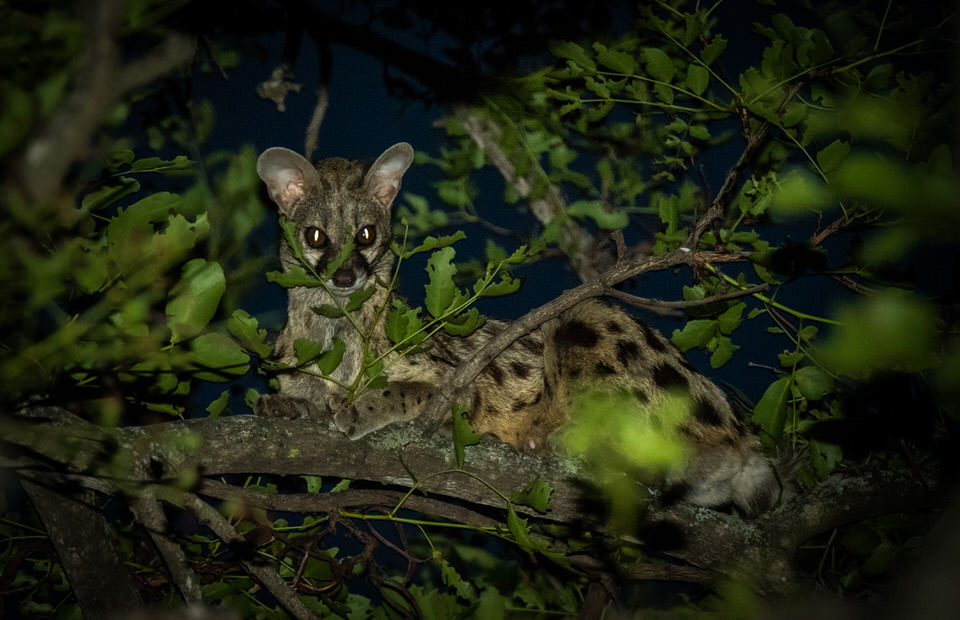 See Genet Jackson in action below!

HOW IT ALL BEGAN

Last year Wildlife ACT and our conservation volunteers came across camera trap images of a genet riding a buffalo. If that wasn’t strange enough a few nights later we found more images of the genet, now nicknamed Genet Jackson, but this time he was hitch hiking on a white rhino. With the help of our camera traps we were able to capture many instances of this genet riding on the backs of these large herbivores.

News of Genet Jackson spread quickly and the images raised many questions as to what the genet might be trying to achieve by acting this way. Some believed it was merely trying to gain a height advantage, while others thought it might be doing this as a way of catching prey and some suggested the genet might just be lazy and was catching a ride from these bigger mega-herbivores. We have learned through the years never to assume that we know exactly what is going on in the bush, so any of these scenarios could have been likely.