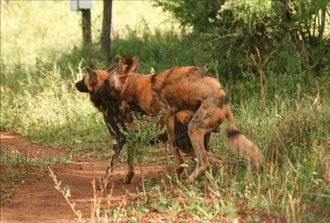 The alpha male was seen mating with the alpha female this last week on a number of occasions. The best sighting was actually of them mating in the car park at the Thanda camp just outside of the volunteers’ (Kalley, Stephan, Wade and Becky) rooms!
If all went well, we could expect to have pups born in about 2 and half months time – mid May – just as the students from Chester University are joining us on an experiential learning experience!

Tembe Elephant Park has a pack of captive bred male wild dog in their holding enclosures being bonded with a group of wild caught females. Once they are released the females will teach the males the ‘ways of the wild’ and will hopefully start producing pups as the pack on Thanda are doing at the moment.
Wildlife ACT starts monitoring the pack from the 1st April…as well as keeping track of the lion population and helping with the monitoring of the largest elephant in Africa!!