Not every pack of African Wild Dogs in Hluhluwe-iMfolozi Park has an individual fitted with a radio-collar. An example is the Masinda Pack, which has got Caia and Rico respectively as alpha-female and alpha-male. The rest of the pack is constituted by Caia’s puppies born in 2011; Bay, Reef and Sandy.

Monitoring a pack that doesn’t have at least one collar is an operation almost impossible that relies only on luck or report follow-ups. However, in April 2012, the Wildlife ACT team of Hluhluwe spotted Caia and realised the great news was that she was pregnant! 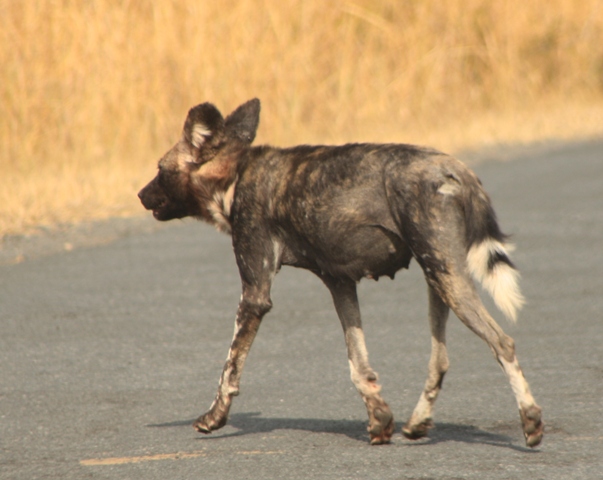 On the 24th of June, knowing that the pack has been spotted around a specific area in iMfolozi, we decided to try a morning call-up session in order to fit at least one collar on one of the pack members. The call-up’s purpose is to attract the dogs to a bait by playing the ‘whining’ sound that they make when feeding or the characteristic ‘hoo-call’ that serves as a contact call when lost from each other. After setting up three call-up stations at different places, contrary to a bunch of spotted hyenas, the dogs unfortunately never responded.

About five months, the 18th of November, a group of tourists told us about a sighting of three dogs and showed us few pictures. One of them was Caia! She seemed in very good condition and was obviously not pregnant anymore knowing that the gestation period is usually two and a half months. Why only three adults? If she was not pregnant anymore, where would the puppies be?

Less than a week later, while monitoring another pack in the same area, we were lucky enough to find a pack with three adults without collars – including Caia – and five puppies of about five months!

Three puppies and one adult of Masinda Pack Close-up on one of the five unnamed puppies The whole pack running on the hill-side, amongst them can be observed the three adults together and the five puppies.