On Thanda Game Reserve, Wildlife ACT focuses monitoring efforts on the African Painted Dog, Cheetah and Rhino. We don’t monitor Lions intensively but help gather data now and again as they can have an impact on the Painted Dogs. On the weekend (Saturday 17th November) Michelle Swemmer, the Wildlife ACT monitor on Thanda, was lucky enough to watch vet, Dr. Mike Toft, contracept three lionesses. 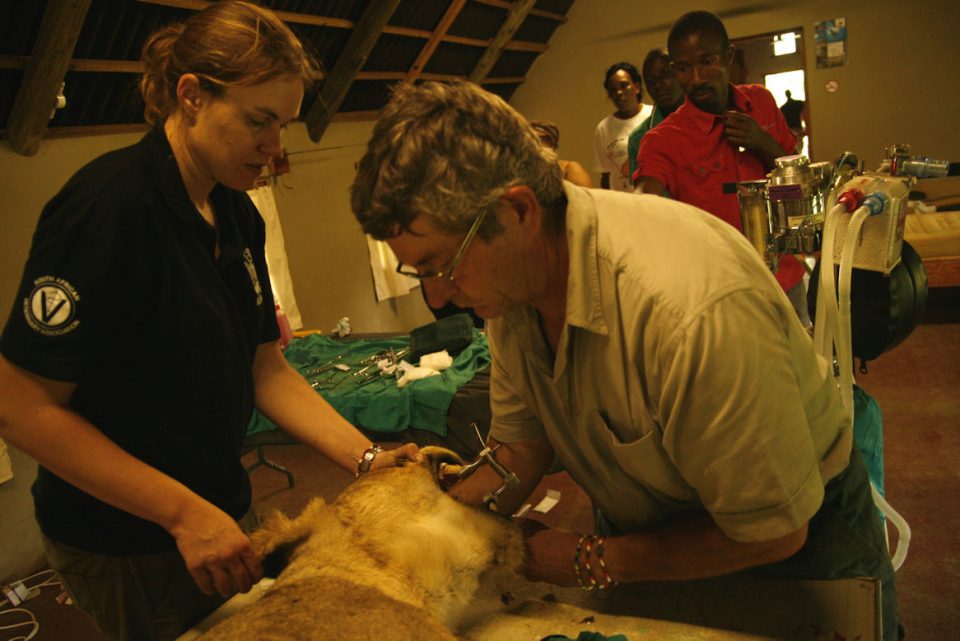 The vet, Dr. Mike Toft, clearing the lionesses throat to insert the breathing tube with the help of the veterinary nurse, Jody. Notice the camp staff behind, very interested but staying well away! 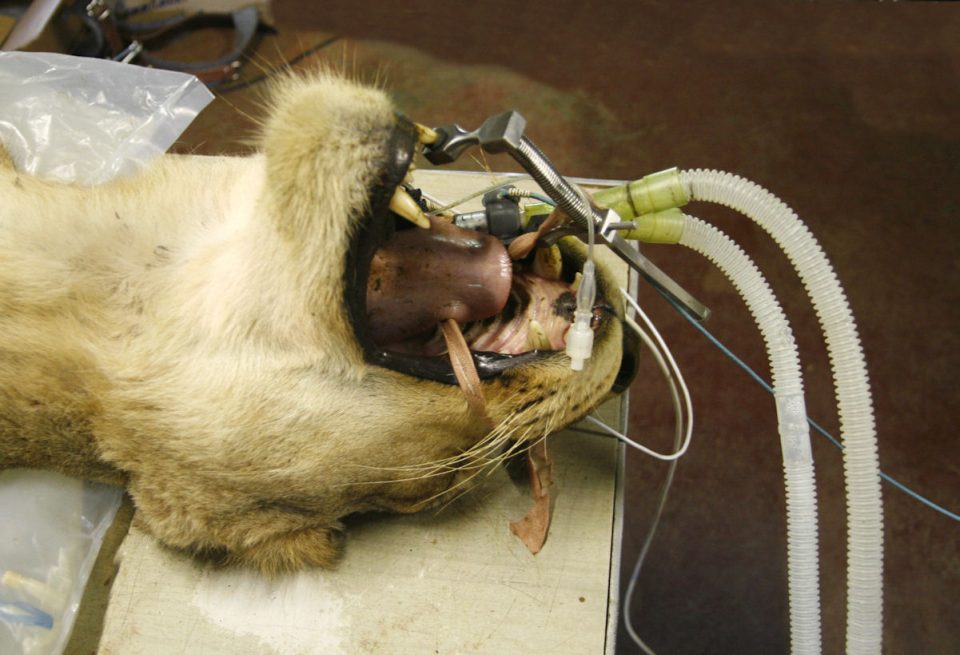 All the pipes and breathing tubes in place

In the city, if you take your cat or dog to be neutered / spayed, it is done in a sterile veterinary clinic under controlled environmental conditions. So what happens if your cat is a rather large Lioness, and you’re in the middle of the Zululand bush and not a city? Well . . . you improvise . . . the best you can! In this case the three Lionesses were darted (tranquilised) by the vet in the field, once they were ‘asleep’ they were driven to the ‘operating room’, which was an empty dormitory in our camp. (You can see the unused beds in some of the photos). 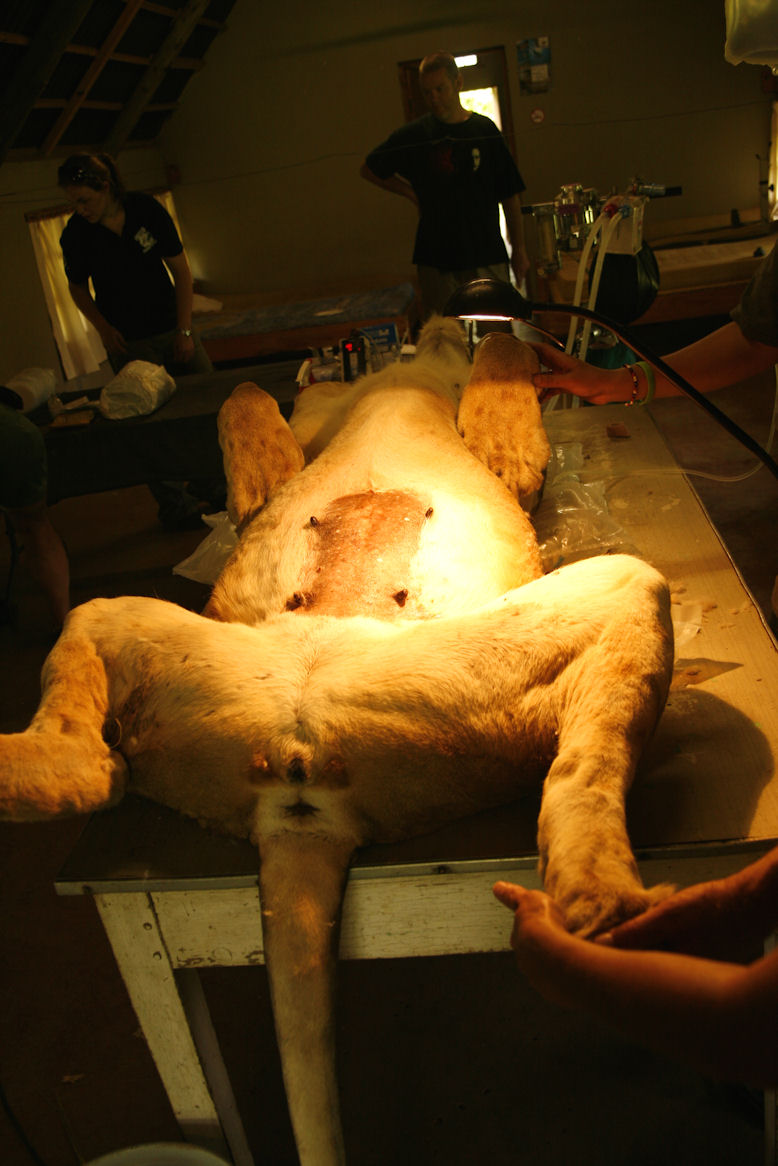 The Lion on the operating table 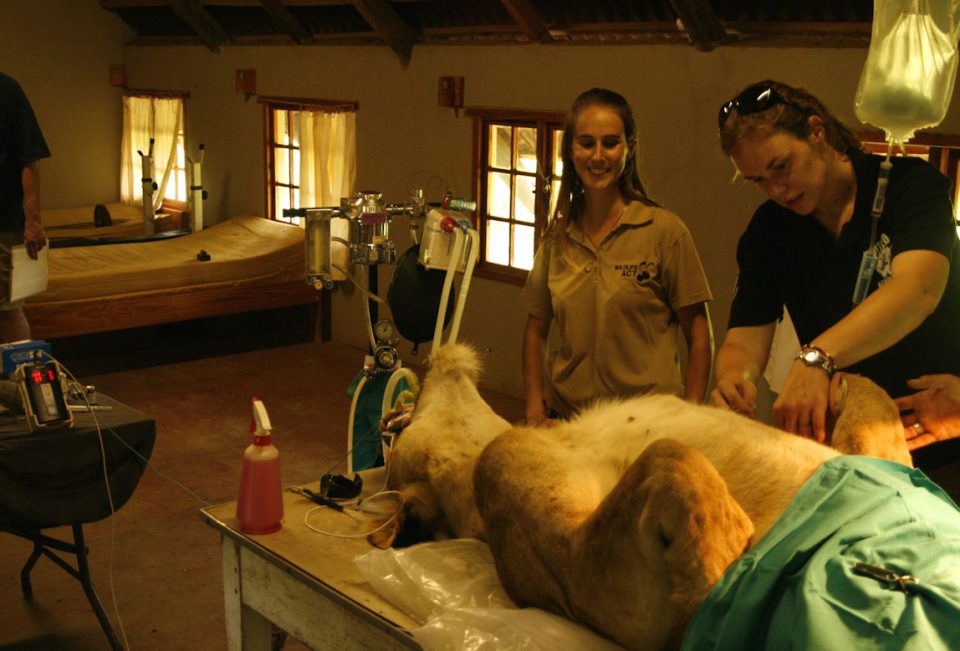 Michelle watching the drip put in by veterinary nurse, Jody.

The lioness was put onto the operating table, and the first thing the vet did was stick his arm down the lionesses throat! Brave brave man, or is he rather crazy? The lionesses jaw is actually clamped open (you can see the clamp in the photo), so the vets arm is safe. The reason he did this was to make sure the lionesses throat was clear of any obstructions so that he could put the breathing tube down her throat. 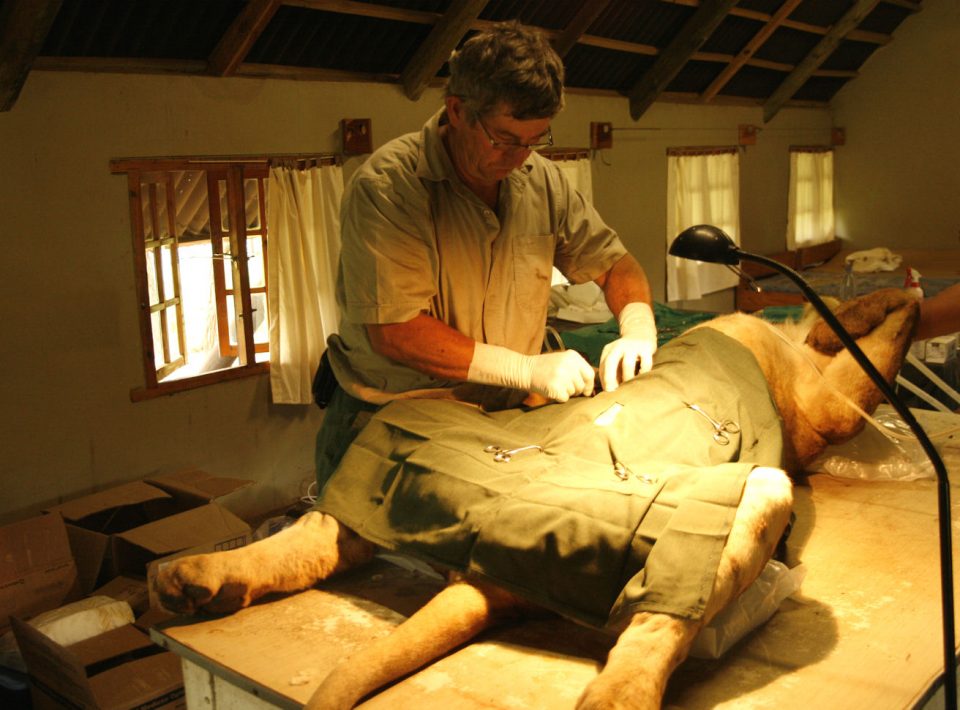 The vet setting up 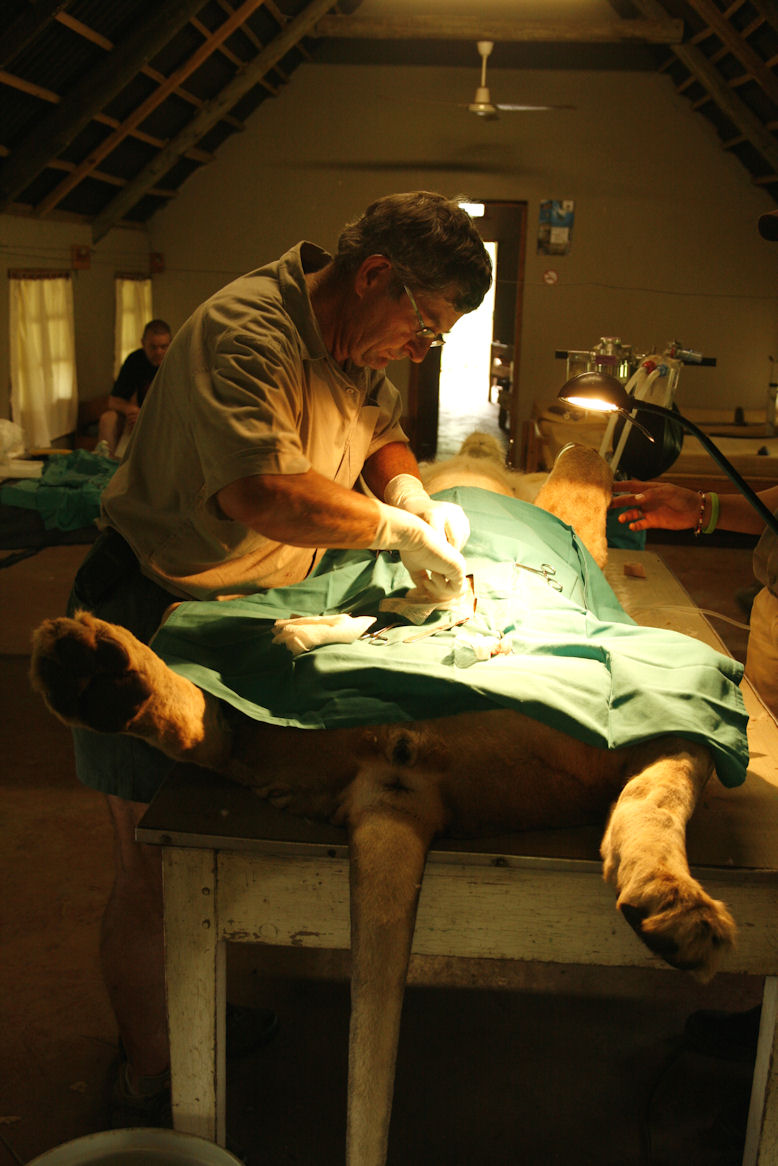 The vet with patient number one

So, with the oxygen and anesthetic all sorted, the next task wass to clean the area on the Lionesses tummy where the incision was going to be made, and to shave off the fur. While the vet did that I went to watch Jody, the veterinary nurse, attach a drip to the lionesses leg. 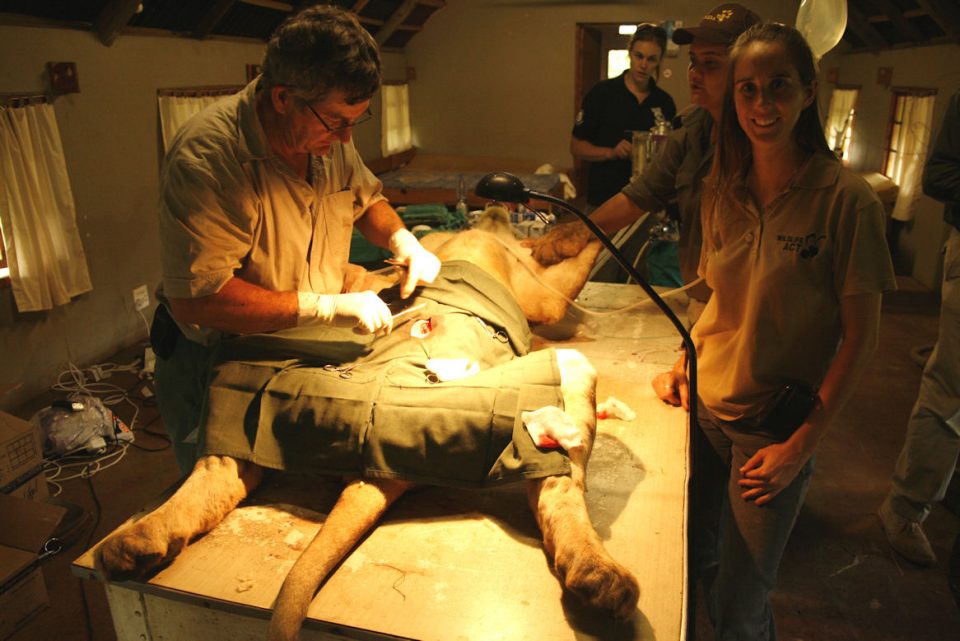 Michelle alongside the vet stitching up the lion 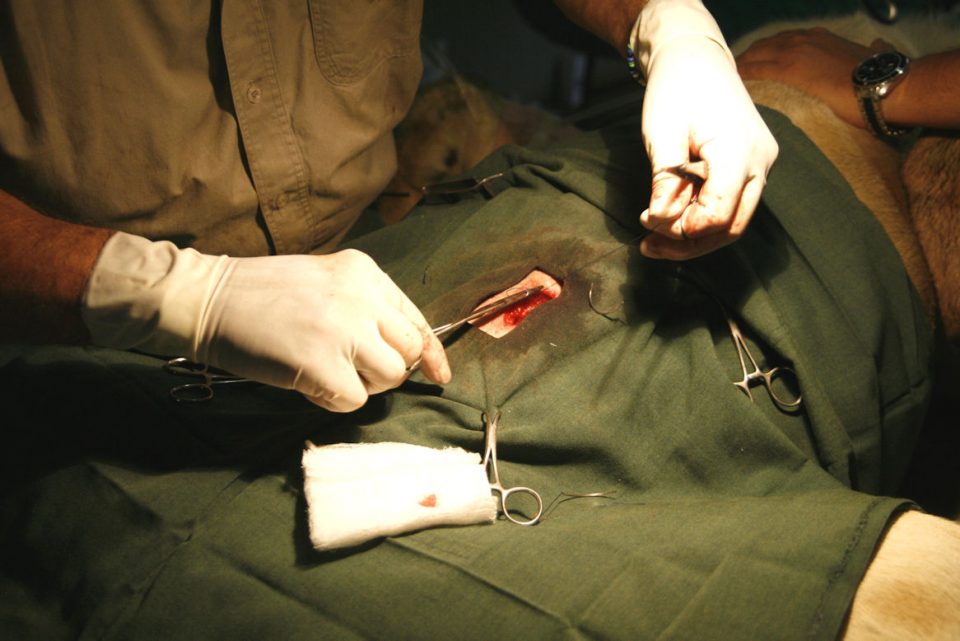 The vet stitching up a small wound

All the preparation work had been done, it was time for the surgery to begin. The vet attached the surgical sheet, and made the small incision. He carefully felt for one of the fallopian tubes and pulled part of it out. He tied the fallopian tube and cut off a section of it. He then carefully placed the remaining part back inside the lionesses and started the process of stitching up the wound. As only one of the fallopian tubes was cut, it is still possible for the lionesses to conceive and continue her biological cycles as normal. This procedure is thought to halve the number of cubs that the lioness can have, so to slow down the population growth of the lions but not stop it altogether. Due to fences and the small size of protected areas, this is how predator populations have to be managed.

After the operation had been successful the vet started to stitch up the incision. This interested me as he used different sizes and different material for the different layers which were stitched back up, quite a process! The last part was putting on surgical super glue to the top layer of skin, so you couldn’t see any of the stitches! Therefore there is no way that the Lionesses can lick the stitches off.

So, one Lioness done, two to go! Wait . . . where have the other two Lionesses been this whole time? We were so interested in the operation that we didn’t look behind us! Thankfully the vetinary nurse was keeping a close eye on them and topping them up with the sleeping drug so that they did not wake up in the room. They also had padded leg-cuff’s on so that they couldn’t stand up. Shewf, at least someone had planned this whole procedure! 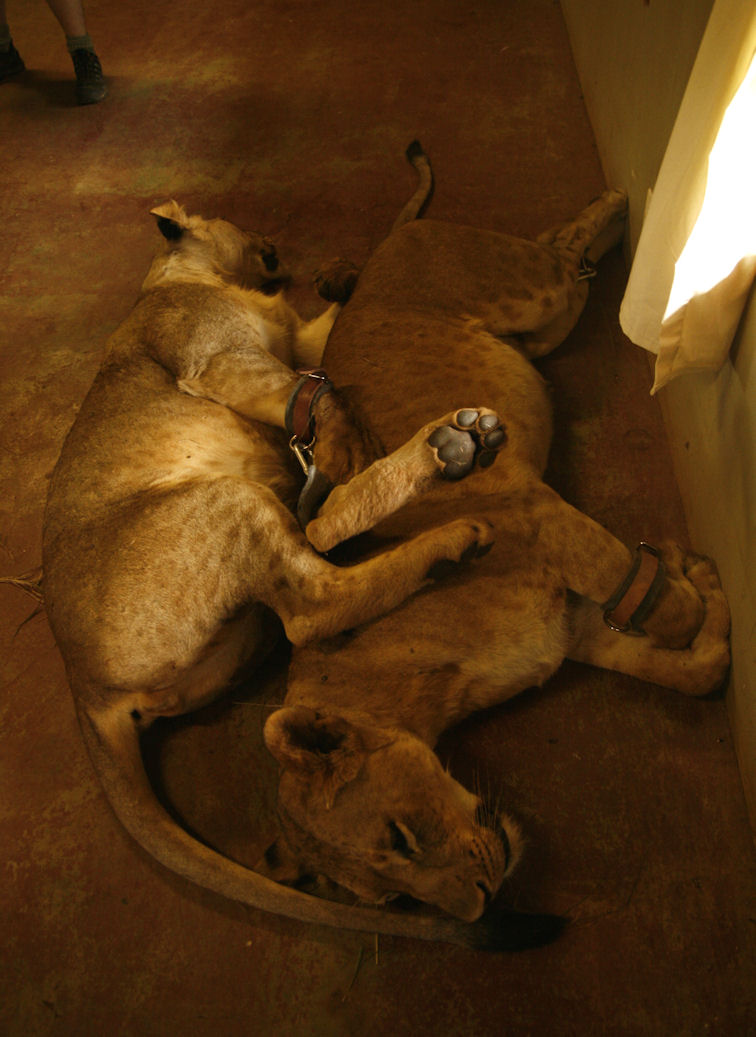 In the ‘waiting room’

The last Lionesses was about to be taken off the operating table, when we noticed an open wound on her front left leg. On closer inspection we found that it was full of maggots (fly larva that feed on dead rotting meat). So the vet got the tweezers and started to pull the maggots out. I think we were all surprised at how deep the wound actually was! Soon the wound was cleaned and medicine administered. 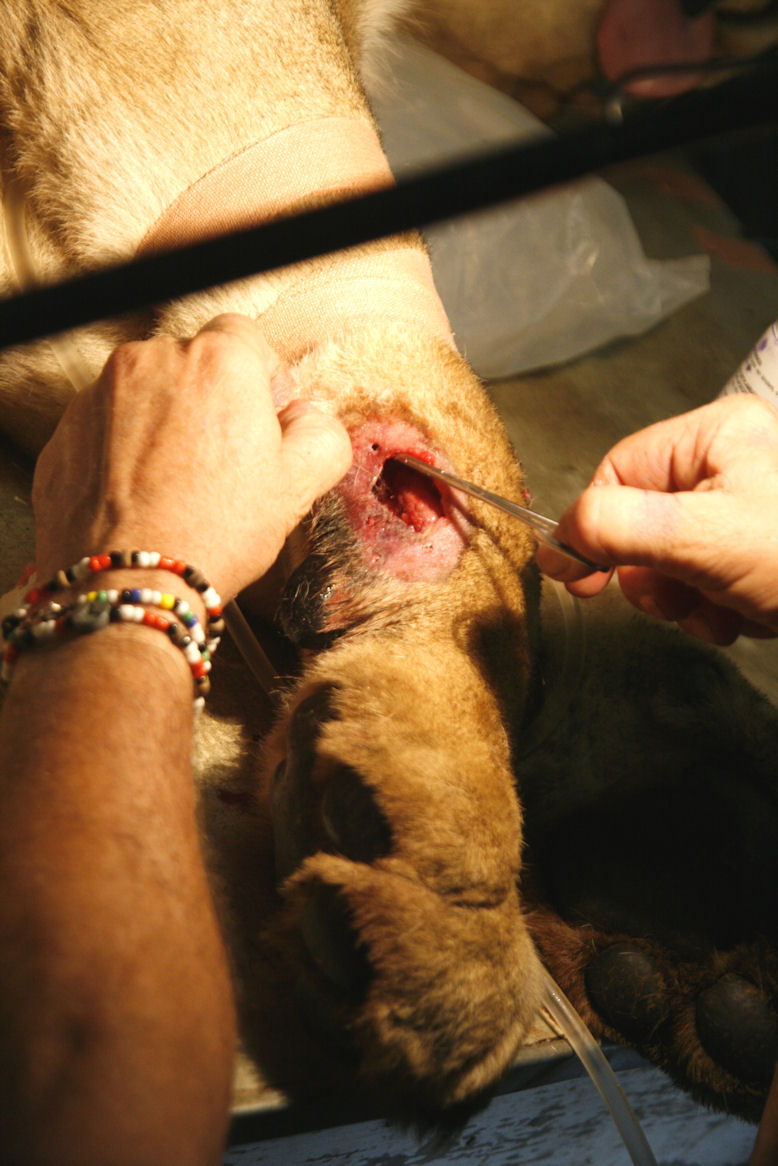 After all was finally completed, the Lionesses were loaded onto the vehicle and driven back to their pride, where they were then given the reversal drug to wake them up out of their sleep induced state. All went well with the whole process, from start to finish, so we all went out for a celebratory dinner.

The following day we saw the entire north pride along with the four cubs, who are five months old. The three females that were contracepted were lying on the main road with the cubs, while the sub adult male and female were under a tree on the left side of the road. It was amazing to see how relaxed the lions were the day after the operation. They got up and walked around without showing any signs of discomfort, a great moment indeed. They had even managed to kill a Wildebeest for breakfast!