Two male lions were moved from Thanda Private Game Reserve onto another reserve and replaced by another dominant male. This means that his new genes will be introduced into the existing population. He’s apparently joined one of the lionesses already. 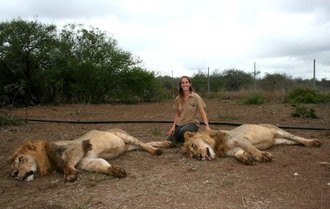 The carrying capacity for lions in Tembe National Elephant Park is set at approximately 20. With their 50+ lion population, they are exceeding the carrying capacity and the excess lions need to be relocated. It has been decided to use a multi-pronged approach to manage the lion population. Firstly, to aggressively source potential homes for them. Secondly, lion contraception of selected females and thirdly, to tube-tie selected remaining females (one side only) to possibly reduce their litter size.

As Tembe lions are disease-free and exceptionally beautiful animals, numerous interested parties have come forward. Various experts, ecologists and wildlife vets will decide which lions will be best suited to particular areas as well as having as little impact on their social dynamics. Lions will only go to recognised reserves with a track record for good conservation ethics and a need for new genes.

A few of the lions have been ear-marked for contraception and others for tube tying. The process is already being tested in the field and a week has been identified for call-ups to collar, brand and collect information. This process is necessary to collect data so that the Park’s management can make informed decisions. The plan is to then raise funds and fit GPS collars to as many of the lions as possible. The data will allow us to see the lion movements in wilderness area and to determine how their movements affect other species.

Wildlife ACT’s main focus on Tembe Elephant Park is the monitoring of the Lion, African Wild Dog and Elephant populations, as well as incidental biological monitoring of other priority species (Rhinos, Leopards). Tembe is a “Big 5” Reserve but does not have Cheetah. Learn more about the different wildlife reserves we work on