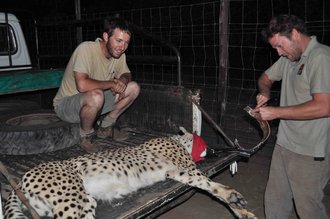 The team in uMkhuze were able to collar a female cheetah in April. By identifying the spot patterns we found this to be the daughter of another cheetah in the park who has three cubs of her own. Whilst collaring this female we also managed to remove a snare from one of her two male cubs. Now that the two cheetah brothers (introduced into uMkhuze in 2010) have eliminated the other male in the south, their territory has expanded considerably. They now overlap with all the known females in the reserve.