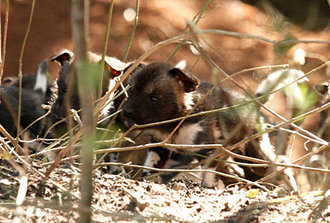 The Alpha female Wild Dog on Thanda has given birth to a reported 13 puppies! All are all doing well so far. The puppies are now 4 weeks old (born 20th May). Although our volunteers and monitor, Michelle Swemmer, have reported hearing them from inside the den for a few weeks now, six of the puppies were seen for the very first time yesterday (17 June). Michelle reported that this morning  all 13 pups were counted briefly coming out of the den, which is wonderful news for the Wild Dogs on Thanda. We trust that things will go well for the Alpha and her litter in the weeks and months to come.

The White Rhinos on Thanda are also producing young at the moment – “C2” has a new bull calf (full of energy and very adventurous), and “C3” has had a female calf, who remains rather shy and nervous. It looks like the female Cheetah is also pregnant, so our volunteers will be keeping an eye on her progress as well. Exciting times – we will keep you posted on further developments. Watch this space.