Our group of wildlife volunteers in Hluhluwe, South Africa, began our evening monitoring session with our wildlife monitor Megan Lategan. We were tracking the wild dogs as they made their way back to the den on the south side of the river. As we made our way towards the river bank, we heard the crackling-tree sound that is a constant whenever surrounded by elephants hiding in thick bush. In no time we found the culprit peacefully resting by the river side, drinking the cool water. Next there was a thunderous splash and ripples went sailing down the river—the elephant had decided to swim across. We rushed down the road and around the corner to see if we could catch it exiting the river and scrambling back up the bank on the other side. We made it just in time and as the elephant climbed out of the river, we could clearly see the waterline marked across its giant shoulders—the river was deep!

Soon enough, we discovered that we were surrounded by a massive breeding herd of elephants, and one by one, each crossed the river and scrambled up the bank just in front of us. Just like a scene out of The Jungle Book, the elephants walked one in front of the other, babies scrambling to keep up. The waterline on each elephant was different, obviously corresponding to its size. By far the funniest were the young elephants that emerged from the water soaking wet, no waterline to be seen. 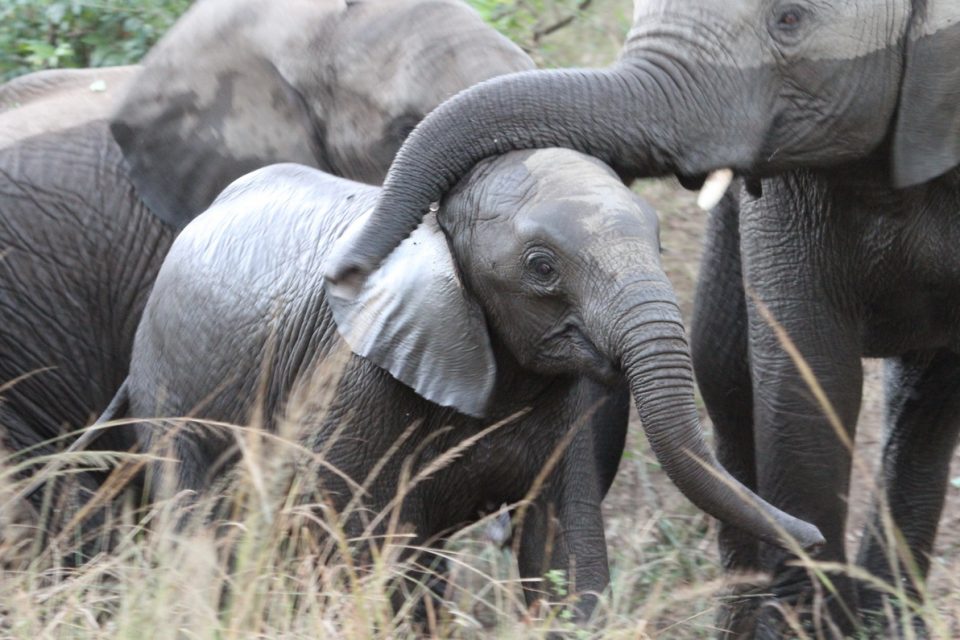 We continued admiring the elephants until a bull in musth, decided that we had overstayed our welcome and we here hastily chased away. Despite this rude departure, we were fortunate to have had such an amazing sighting of these amazing creatures. The highlight of the evening, however, was the lone guinea fowl that seemed to have decided it was an elephant as well. This guinea fowl spent its time wandering about with the herd, bumbling beside their feet, avoiding what would hopefully be a misplaced elephant footstep and an inevitable squash.