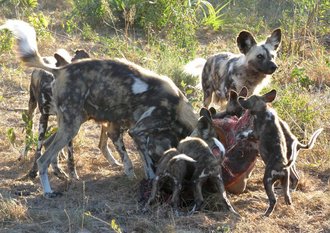 The 8 Wild Dog puppies in Tembe National Elephant Park are healthy and growing daily. Having four captive-bred males as new fathers was initially cause for concern for this wild dog pack, but they have proved us all wrong – excelling in all of their parenting duties. The wild dog puppies have now started eating solid meat with the rest of the pack which is a great sign.

Volunteers on Tembe have started to compile identikits for this wild dog pack which involves spending the mornings at the boma doing observations. This is a critical part of data collection which will ensure accurate wild dog monitoring in the future.

Volunteers have also been busy with the monitoring of lions on the reserve after the recent lion collaring project which took place there a few months ago. Wildlife ACT volunteers on Tembe Reserve also recently observed the darting and capture of two White Rhino (mother and calf), which had been allocated to be relocated to Hluhluwe iMfolozi Park (HiP).

July 20, 2016The first litter of African Wild Dog puppies has come to Zululand Rhino Reserve! As mother and aunt sit guarding the den, 3 from the pack of 5 wild dog adults set off hunting in order to bring back food for both the wild. . .

June 16, 2015The wild dog pups on Somkhanda have arrived! We can finally say that the pack of three wild dogs has successfully denned and are currently raising a litter of puppies that are over a month old. Watch the VIDEO!

September 18, 2014Our volunteers finally got their first good look at the 10 new wild dog puppies of the Crossroads Pack in Hluhluwe.