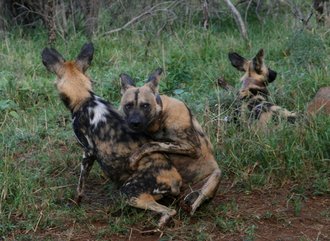 There have been some interesting twists in the mating activity on Thanda. The Alpha pair continued mating throughout March, and both are doing well. The Alpha male was then also seen mating with the Beta female at the end of March.

Although the Alpha pair are usually the only adults that breed in a pack, it has been found that Beta individuals (of both sexes) will take part in reproduction.

There are a few possible outcomes:

1. The Beta female may not conceive, or may abort very early, resulting in things progressing as “normal”.

2. The Alpha female may ostracise the Beta causing her to abort and things to carry on as “normal”.

3. The Beta may be the only female to give birth and either she or the Alpha will raise them.

4. The Beta female’s pups may be ostracised by the Alpha female and her pups.

5. The Alpha and Beta may both give birth and raise the litter together, successfully.

6. The pack may also split into two, and both females may give birth separately with their helpers!

All that remains is for us to wait and see – which is just another reason why the monitoring of these endangered carnivores is so critical!