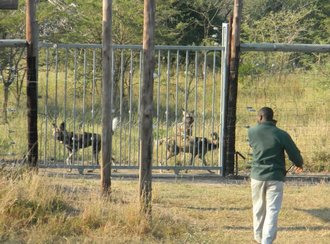 The death of Furaha, alpha female of the Ume pack in Hluhluwe-iMfolozi Park, brings the end to a short (shorter than Mark Boucher’s international cricket career but a few months longer than Tom Cruise’s latest marriage) but significant era.

In 2006 three dispersing males from the Umfolozi pack and three sub-adult females from the Hluhluwe pack joined forces and started the Ume pack which over the following years often numbered in excess of 20 individuals after denning season.  The cause of Furaha’s death will remain a mystery since there was no opportunity to inspect the carcass. Only a rough location was known for the pack’s den site (the exact location is generally avoided in the early days of denning to reduce disturbance of the pack at such an important time) and her tracking collar was found by Zama Zwane (the park’s Wild Dog monitor), mangled and chewed, several kilometres from that location. We could only ever speculate what may have transpired, the result of which has led to the pack abandoning the den and sparked some internal political feuds which have caused ruptures within the pack’s composition. What structure of the pack will remain intact, whether dispersers will splinter off or whether another female will step up to the position of alpha within the pack all remains to be seen.

Furaha maintained her status as alpha female from the beginning of the pack’s formation and was the first Wild Dog I ever saw being collared, back in 2007. She was also the first Wild Dog I had ever gotten close enough to for that pungent, urine infused Wild Dog aroma to tweak my nostrils; hence the sentimental feeling. It’s a Wild Dog thing. But as with many Wild Dogs in the wild, seven years was a reasonable lifespan.

Dispersers from this pack have been used to supplement the pack in Zimanga Private Game Reserve (formerly known as Hlambanyathi) and formed the female component of the first reintroduction into Tembe Elephant Park (Tembe). The Ume pack has also provided dispersal groups which have founded several new packs within HiP. But as we reflect on what was, we can also look forward to what will be.

The past week also saw the release of the small isiPhiva pack into Hluhluwe-iMfolozi Park.  An initiative which started in the park’s predator boma several weeks ago saw two males from Tembe being bonded with two dispersing females from Hluhluwe-iMfolozi Park’s Shiyane pack.  It is hoped this pack of four will quickly settle and if all goes well, albeit slightly late in the breeding cycle underway in the park, deliver pups into the greater system.

If any readers observe Wild Dogs outside of protected areas, please note the location of the sighting, whether the animal is wearing a tracking collar and identify, or ideally, photograph any characteristic markings. Please then notify Brendan Whittington-Jones on 072 992 9483