I’ve been reading through previous articles I’d written at a similar time of year over the past few years. Two major themes seem to follow this time of year; dispersals and boma bonding for reintroduction. Well fortunately we aren’t sitting with packs to be bonded, and I mean that in a positive way. It means that at least the reserves in which we currently intend to have Wild Dogs, we currently have Wild Dogs. How the social dynamics of those packs is playing out is a different matter though. As usual it’s a bag of mixed nuts. The problem though (and it’s only really a problem because all our packs are being managed in fenced, defined areas where management is often required – even Hluhluwe-iMfolozi Park’s (HiP) Wild Dogs in a reserve of 900 km² need management intervention – to balance out packs to ensure their persistence) is that like a handful of mixed nuts, you often get more of the ones you don’t prefer and less of those you do. A balanced pack structure among Wild Dogs tends (not always though) to lead to a more stable pack (meaning it is less likely to splinter up and a tiny bit easier to manage).

Now we are always grateful that the provinces Wild Dogs are breeding, but this year it seems that in the bigger parks, Mkhuze Game Reserve (MGR) and HiP there wasn’t the pup recruitment we’d hoped for and in the smaller reserves, Zimanga and Thanda, there was quite substantial pup productivity. Tembe is still waiting to get pup sightings. One may think this is easy to balance though, through shifting some of the excess to areas where there are fewer. Unfortunately, social dynamics of Wild Dogs means that if this would have any chance of success it would need to mimic the natural dispersal cycle and movements could/should only be really considered once those pups reach the age of about 18 months. Thanda’s pack produced nine pups and Zimanga, the smaller of the two properties, produced eleven pups. What makes Zimanga particularly interesting is that the eleven pups have been raised by just two adult females (there are no sub-adults in the pack and the alpha male died shortly after the pack started denning). Admittedly, there are no Lions and few Spotted Hyaenas to threaten the pups, but there are still potential threats like Leopards, large birds of prey, snakes, disease, heavy rains etc. 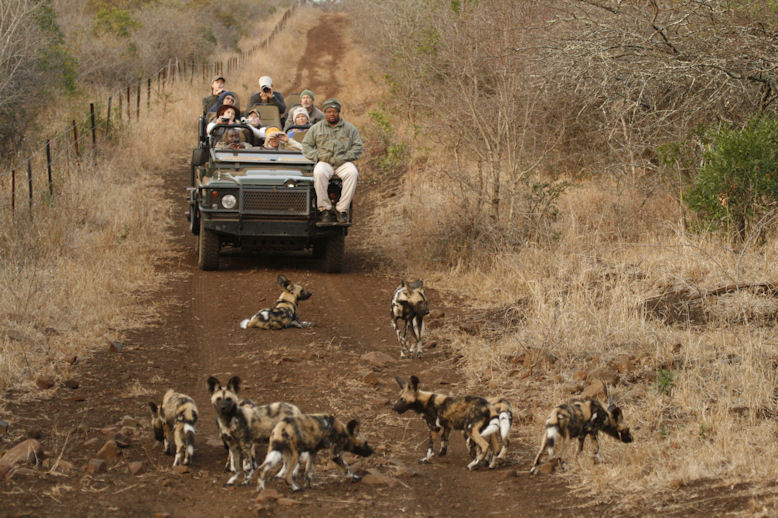 On the dispersal front, it appears there is still the occasional sighting of a pair of Wild Dogs in the Pongola/ Magudu area and one of the Shiyane pack males moving between MGR and Phinda. The heavy rains and subsequent flush of growth in the vegetation may though make sightings of these nomads more elusive than ever.

If any readers observe Wild Dogs outside of protected areas, please note the location of the sighting, whether the animal is wearing a tracking collar and identify, or ideally, photograph any characteristic markings. Please notify Brendan Whittington-Jones on 072 992 9483