Last year I received the book ‘Okavango: Africa’s Last Eden’ as a birthday present. This book contains the most beautiful photographs from the Dutch photographer Frans Lanting, who stayed in the Okavango Delta in Botswana to photograph the diverse wildlife. Looking at the photos in the book you can only dream about what it would really be like out there…

When I finished my degree in Biology last year in the Netherlands, I wanted to gain more work experience and decided to join Wildlife ACT Botswana after reading about the new wildlife monitoring program in the Okavango Delta. I had joined Wildlife ACT before and it was an amazing experience that had lead and inspired me to specialize in conservation biology and work abroad on research projects in both Kenya and Nepal. Thus I arrived in the little town of Maun, halfway through February, to start my adventure!

In total I stayed a duration of four weeks in northern Botswana, two weeks in the wetlands of the Okavango Delta and two weeks in the Chobe Enclave. After my arrival in Maun it was time to leave with the team. We were off to Tau Camp in the Okavango Delta, which is situated in the middle of a wildlife concession. While lying in my bed at night I became aware that I was truly in the middle of the bush; I could hear hippo, hyena and even lion from my tent, wow! 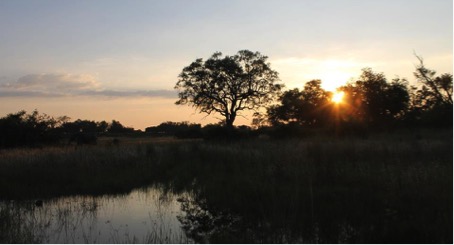 Sunset in Tau Camp in the Okavango Delta.

Most of the work I did in the Okavango Delta was based on the Standard Natural Resource and Wildlife Monitoring Protocol (SNRWMP). This protocol aims to standardize long-term data collection for wildlife population demographics. It is used to monitor all the diverse wildlife populations in the area -from birds to Africa’s famous carnivores- in order to gain more information on how to best conserve them. One group of animals that are an important component of the monitoring protocol are herbivores. To investigate factors such as herbivore distribution, density and group composition we went on early morning surveys and encountered many zebra, giraffe and impala. Knowing that there are so many exciting things to see, it was never a problem to get up early every morning. One herbivore was clearly the most abundant: the African elephant. To see these beautiful, massive creatures up close was very special every time. One afternoon we spent time at a waterhole in the northern delta near one of our herbivore transects and we were very lucky to see hundreds of elephants gather at sunset. It was a spectacular sight and definitely one of the highlights of my trip.

Watching all the elephants gather at the waterhole was definitely one of the highlights of my trip!

The monitoring protocol also involves counts and identification of predators. While we were quite unlucky with predator sightings during the first week, we spotted several lions with cubs, a pack of African wild dogs and a cheetah mother with her two cubs during my second week. This was a good chance to use and practice all the different identification techniques for predators – for example to identify lions by their whisker spots and wild dogs by the unique pattern on their fur.

Mammals were not the only animals I monitored during my stay in Botswana, the wildlife monitoring also involves bird counts. During my previous projects abroad I became interested in birds but I never had the chance to learn more about their diversity, so this was a great opportunity. During morning counts, we learned to identify birds by sight and sound and in this way I gained more insight into the enormous diversity of birdlife in the area. When I started to look up the birds my bird book, I suddenly realized that the Okavango had changed me into a bird watcher.

After two weeks in the delta is was time to move to Wildlife ACT’s other camp in the Chobe Enclave. In the Chobe Enclave we performed similar counts following the protocol, but these included spoor counts and vegetation identification too. It was fascinating to learn to identify all different types of tracks, varying from African wildcat and porcupine, to the tracks of elusive leopards and lion cubs. This was a good moment to realize that there was so much more wildlife around than we could actually see!

One of the largest differences between the Okavango Delta and the Chobe Enclave is that while in Tau Camp the wildlife was very abundant but the camp in the Chobe Enclave is surrounded by cattle posts and crop fields, making game sightings less frequent. However, this unfortunately means that conflicts between humans and wildlife are very common. Wildlife ACT Botswana conducts research and provides assistance on the conflict in the area with a specific focus, at the time that I visited, on crop raiding by elephants in the local communities. During my time in the Chobe Enclave I helped to develop a questionnaire and held pilot interviews within the local communities. This was fascinating, not only because the human-wildlife conflict is such a hot topic, but also because of the complexity of the conflict with all its economic, cultural and political factors. 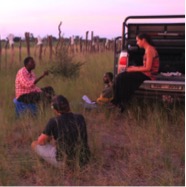 Interview with a local farmer about elephant crop raiding (photo by Robyn Hartley). 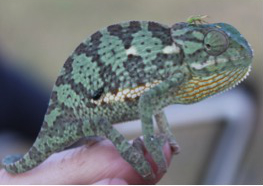 This beautiful chameleon (with a hitchhiker on its head) appeared during spoor counts.

Unfortunately after four weeks it was the end of my stay in the field. Every day is different, you never know what the day is going to bring and for that reason I do not think I could ever get bored in the bush.

I ended my stay back in the town of Maun, as an attendee of the Botswana Symposium of Wildlife and Wetlands. During this four-day symposium, lectures and workshops were organized about all current wildlife research in the area, covering topics from climate change to game farming. It was very inspiring to hear about the broad range of wildlife research topics and this was a good way for me to end my stay in Botswana. I have not only learned more about African mammals and the vegetation they live on, but also about the diversity of birds, identification of predators, the complex human-wildlife conflict and how all these factors are linked together. All of that I’ve learned in one of the worlds most wildest places!

I am now home again and when I have look at the Okavango photography book, I know exactly what it is like out there.