December could not have started any better. We set out on the early morning drive looking for the Sokwezela pack, after we picked up their signal the day before. After some waiting, good spotting and a bit of intuitive judgement, we tracked them down in the riverbed at the lookout point on 17.

We started counting: 9 adults and 6 pups – all still safe and sound. They seemed quite relaxed and so were we, until we noticed movement straight ahead of us on the opposite bank. Three male lions were making their way up the bank, and it seemed like we spotted them before the dogs did!

Luckily the lions were much more lethargic than the dogs and did not seem bothered in the least that their territory was invaded. Once the dogs spotted the lions it became a bit more interesting. They moved forward for a closer look, gave some very nervous barks and decided that a 360 might be in their better interest. 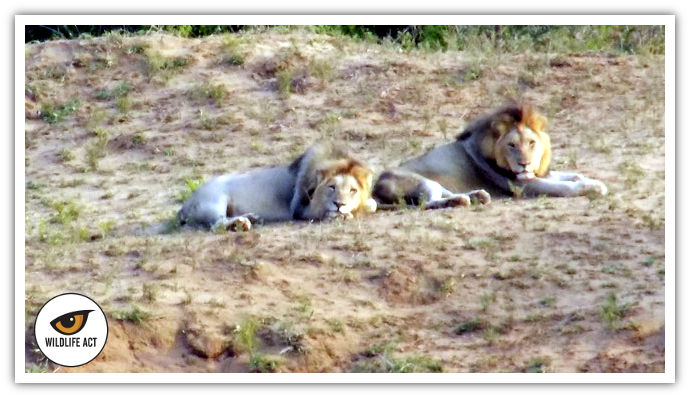 This allowed us to drive up the road for a closer look knowing that they would cross the road at some point. They passed quite quickly as we tried to take photos but we soon lost them again in the thicket. Deciding that we deserved a coffee after all this excitement we headed back to the outlook point to enjoy it in the company of the 3 male lions.

We hardly had a chance to take a sip when we spotted a pack of dogs on the other side of the riverbed. Dogs can run up to 60km/h but surely they couldn’t run around us that quickly! We started counting, 5, no, 6 males, and wait… 7 pups. “Did we count right?” Yes, 6 adults and 7 pups, it can only be Alfie’s Pack. “But the pack has only had 5 adults for the last 3 months? Who’s the 6th..?” 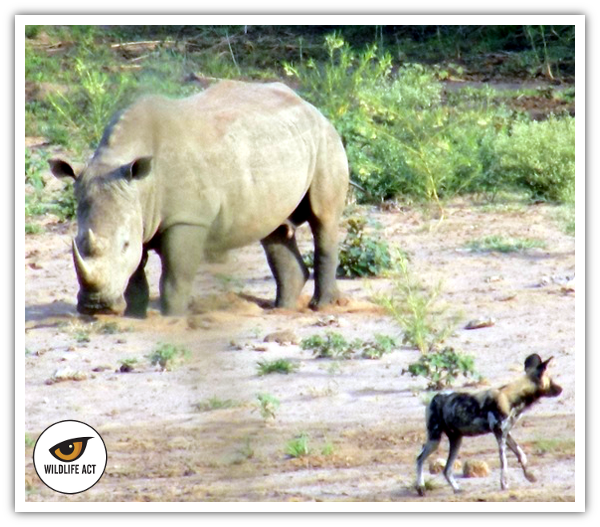 What was more concerning was whether or not they could see the lions. They sure did and proceeded in exactly the same fashion as the group before. It was a repeat show with the only difference being one cheeky dog taking some time out to snap at the hind quarters of a white rhino that was minding his own business.

Back at camp we celebrated our sighting with breakfast and started going through the ID Kits to identify the new pack member. Confusion, debate and more fine-combing was the order of the day, but finally it was clear that it was Lumba – one of the 2013 pups that returned to her former pack! It will now probably be up to the next group of volunteers to write the next chapter of this story…

>> Have you dreamed about volunteering in Africa with endangered species? Click here to find out how you can.