ALLOGROOMING: I’ll groom you if you groom me

Many social animals groom each other – an activity known as social, mutual or allogrooming. Allogrooming in primates serves (among other things) two primary functions, namely hygiene and social bonding. Vervet Monkeys spend several hours a day removing parasites, dirt or other material from each others fur. Studies show that these animals spend a fair amount of time grooming each other in those “hard to reach” places. Thus, being groomed benefits an animal’s physical condition, making well-groomed animals healthier as a result!

Socially, allogrooming plays an important role in establishing and maintaining alliances, pair bonding, dominance hierarchies, sharing of resources, assistance in conflict and protection of young. Studies show that oxytocin (the “trust / cuddle” hormone) is involved in the formation of these social bonds. Increased oxytocin levels during grooming is said to help build and maintain relationships with multiple individuals over time. 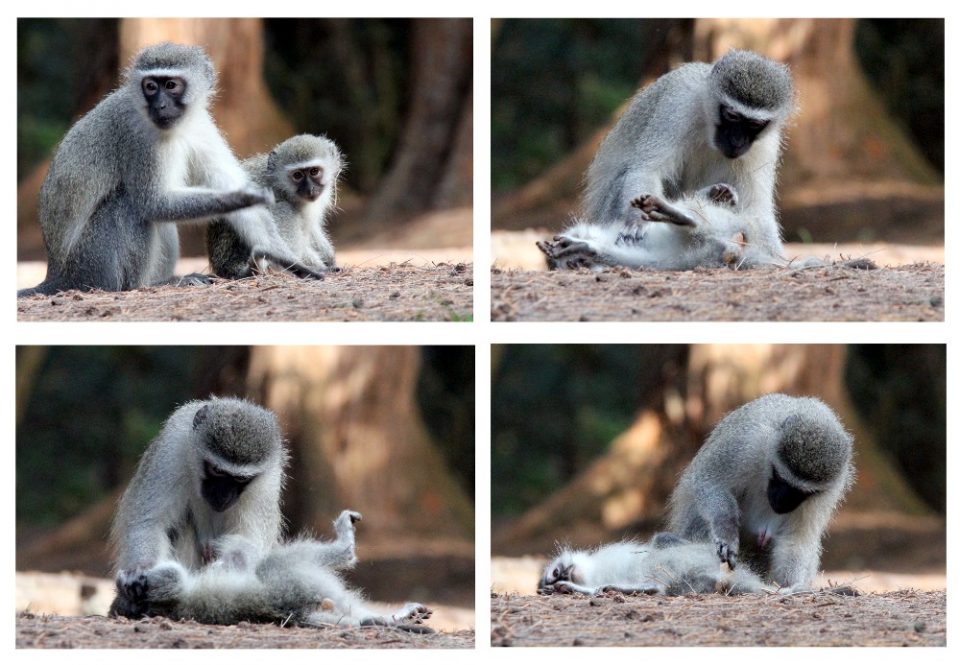 There seems to be an incentive of reciprocity where the groomee becomes the groomer; it has been observed that individuals must give allogrooming in order to receive it. However, hierarchically, dominant individuals are always paid the most attention.

Infants develop close bonds with female relatives that are purported to last throughout adulthood. Allogrooming results in a release of endorphins, which cause pleasure and relaxation. I spent some time watching this female groom this youngster. Initially I was expecting the young one to hop up and dash off to play with the other little hooligans running around us. However I soon noticed his eyelids getting heavy and limbs begin to relax – a picture of pure contentment. He seemed to be thoroughly enjoying his massage.

Cases of human grooming exist too. Allogrooming in humans is associated with increased relationship satisfaction, trust, and experience of family affection in childhood. Mutual groomers are perceived to be more in love and committed to their partners as well as better parents. Human allogrooming plays a role in pair-bonding too. One may even argue that entire industries revolve around allogrooming. Consider hair salons and personal tailors…