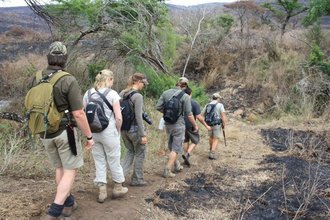 Wildlife ACT is currently busy with the second trial camera trap survey in Hluhluwe iMfolozi Park (HiP). The survey, which began on the 4th of August, had to change camera survey methods in order to gain more data on cheetah (which is the priority species of the survey). Our new method involves placing the cameras on trees that are used by cheetah for either scent marking or as vantage points from which to spot prey. This method is proving to be extremely successful, as we have already recorded  52 camera captures of cheetah from the 10 cameras we have placed in the iMfolozi section of the Park for the second trial survey.

We have also captured photos of leopard, lion, black rhino, elephant and wild dog (as well as 1 photo of the elusive honey badger). The second trial survey has involved 22 cameras (12 in Hluhluwe and 10 in iMfolozi), which have thus far captured a total of 892 photos.

Another aspect of the work being done by Wildlife ACT in Hluhluwe iMfolozi Park involves our volunteers assisting HiP’s Wild Dog monitor, Zama Zwane, with the monitoring of the 2 packs of wild dogs that frequent the Hluhluwe section of the Park. One of the packs identified for monitoring is denning at the moment, although the puppies have not yet been counted. Our volunteers might be the first ones to witness these pups emerging from the den!

Yet another exciting new project for Wildlife ACT in HiP is a 2-month survey of Black Rhino in the Park, undertaken in conjunction with Jed Bird (the HiP Black Rhino monitor). Wildlife ACT volunteers recently assisted with setting up of the cameras for this survey, and got to experience an unforgettable bush walk in the process. 20 of Wildlife ACT’s 30 cameras will be used for this survey, so the Wildlife ACT volunteers on HiP in the coming months will be involved in setting up, checking and taking down the cameras, as well as with the processing of the data that we collect from them. This promises to be an exciting new project, with many exciting encounters along the way.