2018 has seen non-stop action on Somkhanda Game Reserve. Curbing rhino poaching requires a multi-faceted approach, and one option in the management toolkit is Rhino dehorning. Somkhanda’s Black and White Rhino are dehorned in an attempt to dissuade poachers from entering the property. Another management intervention designed to help protect these animals involves collaring and intensively monitoring the population; knowing their home ranges and movements allows for more targeted area protection by Somkhanda’s anti-poaching units.

Immense preparation goes into the planning of Rhino dehorning operations. Despite this, on the day there are still time and safety pressures, weather and terrain restrictions and many other factors which contribute to the team’s stress levels. Removing a horn from a Rhino is a sad event, but with each intervention I’m filled with a sense of hope. When a group of dedicated and passionate individuals from a number of organisations come together for a common goal, the results are inspiring. The individual expertise of the pilot, vet and tracking teams are critical to the success of a Rhino dart, but ultimately it is a combination of these many moving parts which ensure a smooth operation. 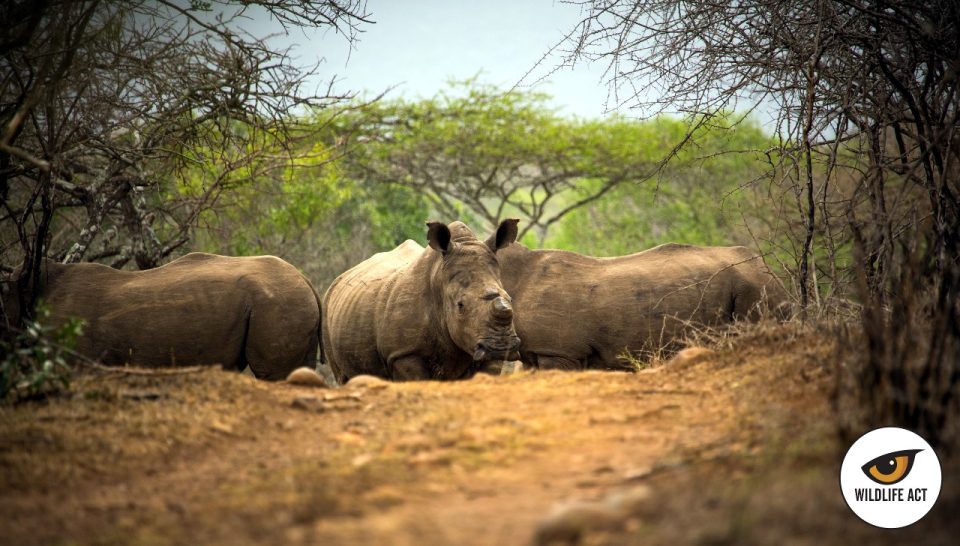 Somkhanda’s Rhino monitors head out before it’s light and track the animal on foot while the chopper and ground crew wait in anticipation. These men are master trackers and are hugely protective of their charges. Once they have located their target animal, using their spoor or tracking collars, they watch and wait while the ground crew assemble. Finally the chopper takes off. When the team in the air have eyes on the Rhino, the pilot skillfully manoeuvres the animal into an area where it can be safely darted and immobilised. The efficiency of the vet and ground team ensure the animal is placed under a minimal amount of stress and is back on its feet as quickly as possible.

And of course, thank you to Sihle Mathe, Mike Gumbi, Zama Ncube & posthumously Moses Gumbi – master trackers and my friends. Wildlands, a programme of WILDTRUST, the Emvokweni Community Trust as representatives of the Gumbi Community, and Wildlife ACT work closely together to ensure that Somkhanda’s endangered species are closely monitored and protected.