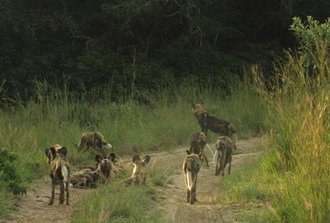 The first few days after releasing or relocating African Wild Dogs into new territory are seen as critical. Not only do the dogs need to contend with unfamiliar surroundings, but they also have to find something to eat while being extra vigilant of more powerful predators like Lion and Hyena. This is especially relevant in the new Tembe pack reintroduced on Tembe Elephant Park 5 days ago, as 4 of the adults in the pack were captive-bred and raised, and have had no experience with these competing predators. The 3 wild-born adults grew up in Hluhluwe-iMfolozi Park (HiP), and it is their job to teach the novices the ‘ways of the wild’. (Hluhluwe-iMfolozi Park is about 150km to the south of Tembe and is quite different in terms of habitat: dominated by savannas, grasslands and woodlands, whereas Tembe is known for its thick sand-forest and open pan systems).

When the Wildlife ACT team headed out to track the dogs on Saturday morning, the hope was that we would find a happy and healthy pack. We found signal for the dogs in the south of the reserve, but because the dogs had gone into thick brush, we could not see them. We spent hours waiting for the dogs to make their appearance without luck, and we started to get worried, wondering if the dogs were tiring after not eating for a past few days. Just before sunset, the dogs appeared from their hiding place. A quick count revealed that not only were all the dogs accounted for, but that they had in fact made a kill earlier that morning, as their stomachs were nice and full and their faces covered with blood. They had therefore spent their whole day sleeping off their big breakfast!

We tracked them down again on Sunday, and were again surprised as we realised that they were feeding on another kill. Although we could not see what they had killed, there was no mistaking the chittering sounds of the dogs feeding and the smell of the kill. The dogs spent the rest of their Sunday afternoon relaxing near the southern boundary fence, looking quite content and uninterested in escape – let’s hope it stays that way.

You, the person at home, can help us conserve one of Africa’s most endangered canids, by “liking” and following our facebook page and by encouraging others to do so, or by helping us to think of ways to raise funds and enable us to continue our work. Finally, you can become a wildlife volunteer and join Wildlife ACT as we monitor this special pack as it settles into its new home – a protected area which Wild Dog have not inhabited for nearly a century.