This is my third time as a wildlife volunteer with Wildlife ACT in Zululand, South Africa, and I was finally lucky enough to see the collaring of an African Wild Dog (also known as a Painted Dog).  I’ve had some amazing experiences in the previous two visits but the timing was never right for a collaring. Three of the wild dogs from the Tshokolwane pack in iMfolozi had dispersed and been spotted in Hluhluwe.  It was a priority to fit a collar to one of the wild dogs in order to monitor where they are, now that they had left their original pack. When dispersing, wild dogs can end up in the surrounding community, which is not a safe place for them to be. Since I was last in uMkhuze in November 2013, I have been trying to raise money to buy an anti-snare collar and right before I left England this time, the total raised was just enough. Whilst I realised that I would not see “my” collar fitted, the Wildlife ACT team had been notified of what I had done and therefore we were invited over to Hluhluwe.

We set off from camp at 4.15am and joined the Hluhluwe wildlife volunteers at the location where the wild dogs had been seen the previous day. As the sun was rising a carcass was tied to the back of Zama’s vehicle (Zama is the official African Wild Dog Monitor for Ezemvelo KZN Wildlife Hluhluwe–iMfolozi Park). He and the vet, Birgit Eggers, positioned themselves nearby (I saw Birgit measuring the distance so that she could get the perfect shot with the dart gun).

The vet and bait wait patiently in place 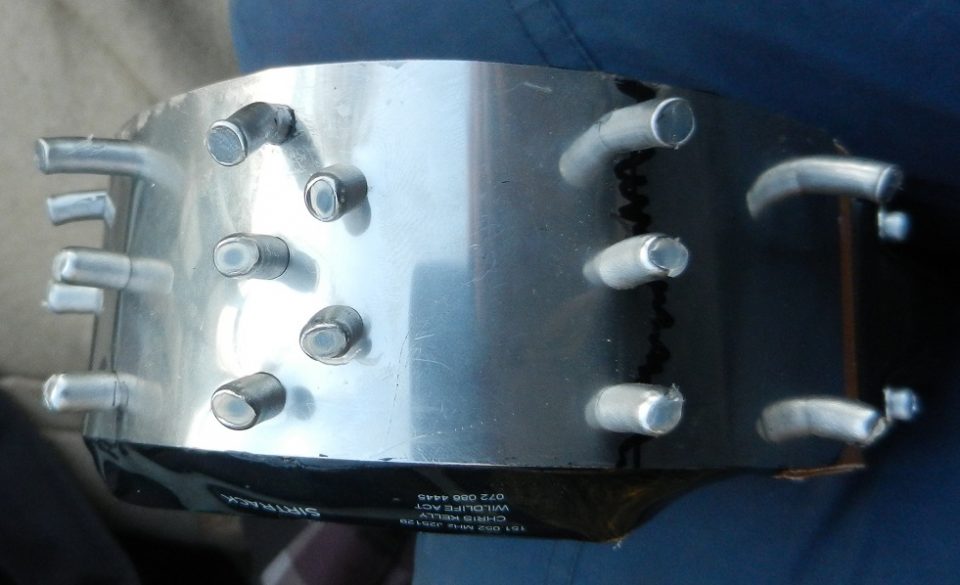 Specially designed spikes on the collar to protect against snares

The Hluhluwe volunteers drove a little way off and started playing a recording of a ‘hoo-call’ to encourage the wild dogs to come to the bait.  A hoo-call is used by wild dogs to try and locate each other. At the end of the recording there was the sound of wild dogs “chattering” which they do when they have killed or find a carcass, so the pack would hopefully know that there was a good reason to come to the noise.

The wildlife volunteers watching from the back of the bakkie

A relatively short time later, I turned to my right and saw the three wild dogs coming over the brow of the hill. They quickly moved around our vehicle (positioned across the road in case any tourists came and interrupted proceedings) and rushed to the carcass. A few minutes later they were joined by a cheeky hyena who wanted the carcass for himself.

A tussle ensued but the pack managed to send the hyena on his way.  Birgit took the opportunity to fire a dart into a wild dog nicknamed Nile.  She valiantly tried to fight the drug, and when she fell over the first time it was wonderful to see her two sisters trying to get her up – one even put her nose under Nile’s back legs and pushed them in the air.

Birgit and Zama fitting the tracking collar to Nile

She did rally and made it to the track behind our vehicle, where Birgit and Zama quietly approached her. They put a cloth over her eyes to keep her calm and very quickly fitted the collar.  Birgit gave her the reverse drug and within a few moments she was up and joined her sisters.