Why are Wild Dogs so Endangered? As a Wildlife ACT monitor one of our key roles, along with monitoring endangered species such as the wild dog,  is also to educate the wildlife volunteers on the real issues that exist in conservation. On a safari, the truth is often hidden and game drives are there to portray the beauty of the park. Growing up in South Africa, I spent many holidays in game reserves. The saying “ignorance is bliss” was appropriate as driving through a park, everything appeared perfect. However, as a monitor working with volunteers, portraying a “perfect world” is not part of the experience.

As a project, I asked conservation volunteers Larissa Lima and Anna Wallin to put a blog together about the causes of wild dog endangerment and why they have come so close to being on the brink of extinction.

Of all the African predators, wild dogs are among the most successful hunters. They can reach speeds of up to 60 kilometers an hour and have an overall hunting success rate of roughly 70% (by comparison, lions have about a 30% success rate). Living in packs of up to 15 adults, they are highly sociable and intelligent, with the younger dogs learning how to hunt as a pack from the older ones. Their successful teamwork means that wild dogs can successfully chase off a small number of hyenas (who individually are far more powerful).

Despite these advantages, there are only around 400 wild dogs left in South Africa, making them the world’s second-largest endangered canine. Once covering almost the entire continent in numbers half a million strong (sometimes in packs of up to 100), they are now only found in a few pockets in eastern and southern Africa. 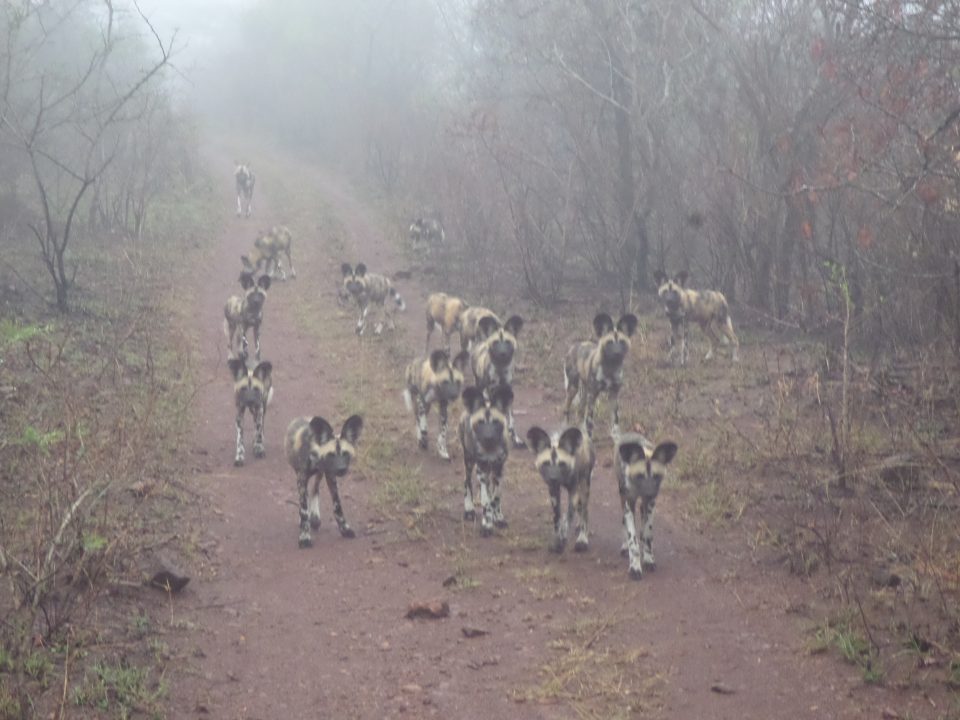 Why are Wild Dogs so Endangered?

1. Loss of habitat: Wild dogs are largely nomadic and cover vast distances in search of food. As a result, they often come into contact with farms, roads and settlements. Wild dogs require big wildlife protected areas where they have enough space to hunt (and thus don’t have to leave the reserve) and are not in excessive competition with other big predators, such as lions and spotted hyena.

2. Disease: Coming into contact with domestic dogs means that wild dogs can become infected with diseases such as rabies, distemper and parvovirus.

3. Poaching: As a result of covering vast distances in search of food, wild dogs are frequently caught in snares left by poachers. While wild dogs are not usually a target for bush-meat, they are often and unintended by-catch.

4. Human conflict: Wild dogs are frequently shot or poisoned by farmers, who blame attacks on their livestock by cheetah and leopard on wild dogs.

The wild dog forms an essential part of the biodiversity of Africa – they are integral in the regulation of prey species and contribute towards a healthy ecosystem. Engaging local communities is an important way of helping the survival of wild dogs – as they are so rare, many people have never seen one before!

It is apparent that the threats are real. One may be aware of the fact that wild dogs are critically endangered but the relevance in this is WHY?

As a conservationist and a supporter of the wild dog, I challenge you to spread the word and educate your friends, family and colleagues and together we can combat the threat of losing such a special species – the African wild dog. Help educate anyone who asks, “Why are Wild Dogs so Endangered?”