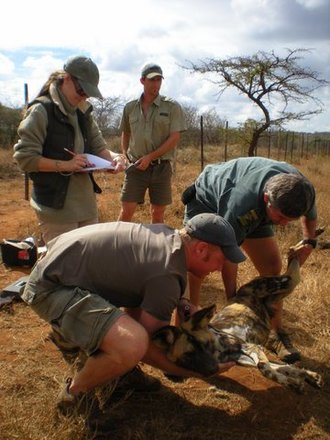 We humans are quite strange creatures in many ways; we have a tendency to engage in activities that are a little perplexing, dangerous or just odd; all in the name of fun. Some people jump out of aeroplanes to test their mettle while others roll wheels of cheese down hills in the name of sport. One of the more noticeable aspects of human nature that seems to crop up quite regularly when trying to work with a another rather mobile species, is us humans are often surprised that many other species of animals choose to ignore us and our wisdom. How beastly of them! That Wild Dogs may choose to move beyond a human planted fence seems rather incredible or heinous to some; almost as incredible as some people believing that 20 or 40 kilometres of electrified game fencing may be completely impenetrable. More often than not Wild Dogs have some respect for such a boundary, but at times they simply don’t.

Many of the resident populations of Wild Dogs in KwaZulu-Natal have a history linked to another nearby reserve, often as a result of visiting animals from elsewhere. In this regard I thought it may be of interest to track back a little to let you know over next few months how each of our resident populations started up.

The Hluhluwe and Umfolozi game reserves were separately proclaimed in 1897. Connected through a corridor of state-owned land, the reserves were formally joined in 1989 to create the 940 km² Hluhluwe-Umfolozi Game Reserve. Completion of the integrated management plan and formal proclamation of the reserve as Hluhluwe-iMfolozi Park (HiP) is still in process. Lions, Wild Dogs, Brown Hyaena and Cheetah were extirpated from the reserves by 1920 through vermin control and it was only the work of visionaries many decades later which sought to restore some natural balance through targeted predator reintroductions.

Twenty two Wild Dogs, 16 of which were captive reared, were reintroduced into HiP in four stages from 1980 until September 1981 and formed a single pack. Four additional Wild Dogs were introduced in 1986 but emigrated from the reserve shortly thereafter. The maximum pack size fluctuated between 28 animals in 1986 and seven animals in 1995. Additional introductions took place in 1997 (three males + one female), 2001 (two males + two females), 2003 (five males + three females), 2006 (three females), 2008 (one male), 2008 (three females) and just last year two males and two females. Collectively, these injections of new dogs provided momentum to the population to kick on past just a tenuous couple of packs, finally bringing an element of stability (if any Wild Dog population could ever be classified as stable).

The population currently comprises 106 adults and yearlings in eight packs; the single largest population of Wild Dogs on a South African game reserve outside of the Kruger National park. Although Wild Dogs were recorded to have left HiP sporadically since 1984, with the exception of ad hoc reports from members of the public or from private game reserves, the routes or fates of many of these dogs remain unknown. In more recent years, and with greater interest shown in the fates of such dispersal animals we have been able to build a better picture of potential dispersal routes and understand the significance of the growing number and sizes of conservation areas, government, private and community reserves in northern KZN.

An example of this was the dispersal of two female wild dogs from HiP to Thanda Private Game Reserve in 2004 which was the catalyst for a formal wild dog reintroduction into that reserve in 2005. More about that next time…

The project to expand the current range, and facilitate proactive management of Wild Dogs in northern KwaZulu-Natal is carried out through a partnership between the Endangered Wildlife Trust (EWT), Ezemvelo KZN Wildlife, Wildlife ACT, Wildlands Conservation Trust and the participants within the KZN Wild Dog Advisory Group. The EWT’s Wild Dog efforts are supported by Jaguar Land Rover South Africa and Land Rover Centurion.