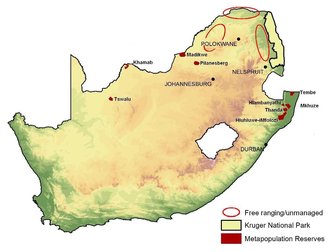 Large carnivores around the world are pretty much in the same pickle. We the humans are generally slicing up the land into smaller pockets, and then making money off that land or scrounging a living in ways which are rarely conducive to keeping large, wild critters with sharp teeth which eat other creatures. Whether it’s mines, plantations, housing developments or even game farms, the large carnivore is first to go.

Now I’ll be first to admit I’ve very tired of reading more negative conservation stories; poaching of this, electrocution of that, corruption and destruction, leaking poisons etc. For perspective, consider that 448 rhinos were poached in South Africa in 2011, a rate which would have exterminated our country’s Wild Dog population in just one year. It does regularly seem rather a bleak patch in our conservation legacy despite some very positive ideas and some localised increases in general wildlife. It often feels a bit hopeless; I would imagine similar to the emotion (ok throw in a dash of anger) a telemarketer feels when they realize the only reason I was listening to the deal was to entertain myself whilst driving somewhere.

In this regard I recently left a meeting with conservationists and farmers in Limpopo Province with mixed emotions. There was of course the ominous thought of having to endure more stop-and-goes, but the real seed of concern lay with trying with our colleagues, to figure out how one works a solution out of battle ground of serious anti-carnivore sentiment (particularly among wildlife ranchers who are now intensively farming high-value animal oddities like “golden wildebeest”) and refreshingly pro-carnivore conservation/tourism enterprises. It’s hard to know what to make of ranchers who will support our work fully if we just remove all the carnivores and put them “somewhere else”.

On the positive side though (depending on how you look at it) the Waterberg region north of Bela Bela is one of the rare locations in South Africa where there are still free-roaming, unmanaged Wild Dogs. It is an area of several hundred thousand square kilometers, sliced into many hundreds of properties,  but due to low productivity of the land, no sole reserve appears large enough to contain a single pack of Wild Dogs; even reserves of 900 km² (at roughly this size Hluhluwe-iMfolozi Park contains over 80 Wild Dogs). Despite decades of persecution the dogs have persisted. Nobody knows how many there are; ranchers say “too many” and conservationists say “too few”. Reports vary from one pack to maybe even two packs and a few stragglers. They have the apparent skill to disappear for months of end, and then “materialize” and lie 20-strong on a district road oblivious to the fuss, frolicking and cavorting; a rare pleasure to some, prime evil to others. How they have survived to this day we aren’t quite sure but as a pro-Wild Dog person it’s a bit of good food for thought.

Several weeks ago, when staring at the crumpled, biltong-like foot of a pregnant Wild Dog which had had its leg partially severed in a snare and yet had the pain-threshold and perseverance to keep up with its pack for many kilometers over many days, it really did seem like we were fighting against all odds to keep these animals in our KZN ecosystems. It still does. She is now one of two dogs in her pack which are running with three legs. However, take time to watch a pack, watch their boisterous interactions, and watch how they just carry on oblivious to their conservation status and all the fuss around them. They are evolutionary masterpieces, camouflaged dynamos of the bush and could teach us a social lesson or two. Just for a brief moment they deflect us from the thoughts of wildly contrasting perceptions, economic viability, ecological persistence and the scourge of snares. That is because they are often just so exceptionally entertaining to watch.